For some reason, I can no longer update this blog from home.  As I am (as always) working on a project or another, I'd encourage you to head over to my new site, with updates on the KTM, the supermono, the ZX7R, and a new Bandit Project.

You can find it here: 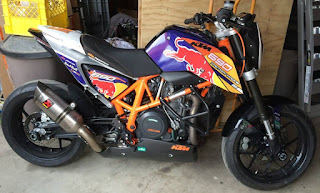 Actually installed these graphics myself.  Some alcohol spray to clean and prep the panels, as well as a decal applying solution that allowed me to lay them on "wet" before squeegie-ing out the liquid.  A bit of help from Kate's hairdryer and it's done.  As you can tell I'm a total MotoGP fanboy... I really don't even drink Red Bull that much, but I'm pretty excited about the new Moto2 and MotoGP bikes from KTM.  Last race weekend at Gimli coming up this weekend...
Posted by The Kids Cafe at 6:25 AM No comments: 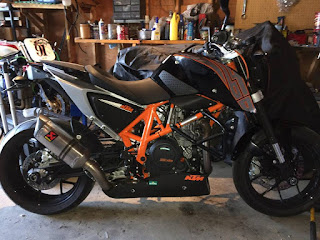 Not the best pic, but you can see I've added an Akrapovic full system to the 'duke.  This was the full tilt titanium system that was sold as an aftermarket accessory and used on the EJC racing bikes.  A huge weight saving over the stock system, and there is less heat transferred to the bellypan by the removal of the catalytic converter, which like all catalytic converters, got very hot.

The exhaust note is great, low and rumbly, louder, but not offensively so.  As I already had the Power Commander, loaded with the "stock" map for the old system, I just downloaded a full system map once the exhaust was installed.  It runs well as is.  Likely more power could be found with a custom map, but a quote from the local/only dyno shop was $500.  Yikes.  Will have to save my pennies or simply make do as is.

I also installed a manual cam chain tensioner.  Others claimed it quieted the engine (the LC4 lump is noisier than most), whereas I didn't notice a difference.  On other bikes I've done (DOHC engines), it is quite obvious when the CCT  is running loose.  The single cam design of this engine meant I couldn't get it to "whine" noticeably (indicative of a too-tight camchain tensioner), nor could I get it to make the classic "loose camchain rattle".... it was just as loud as it always was.  I turned in the adjuster till it just made contact with the guide, and turned another 1/2 turn.  At least it won't fail like an automatic oil-driven one could.  With 3000 kms on the clock, it is less than 1/3 towards the first valve inspection interval -- at that time it is suggested that the rockers are checked, as well as the valve lash.  Others on forums simply say the LC4 is a noisy engine, wear ear plugs, and inspect the valves and rockers when you can, and ride the damn thing.  I'll try...

Hopefully some more street riding weather remains before the snow flies, along with one more track weekend in later Sept.  If I change out the coolant for water and safety-wire the bolt, the bike is race-prepped, not just safe for trackdays.  Should I take it out in a few Cdn Thunder races...?

It's been some time since I posted anything on this blog.... I'm having a blast on the KTM, and recently took it the 12 hours south to Hastings for a Trackaddix track day.  Wilson and I made the trip together. 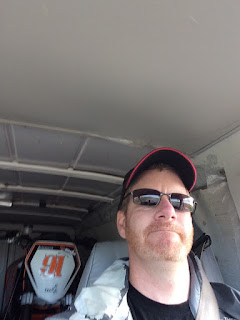 Bike selfie?  I really shouldn't be using my phone while I drive, but Hwy 10 south in the morning is pretty barren.  Can you tell I'm excited?  The cereal killer van didn't skip a beat. 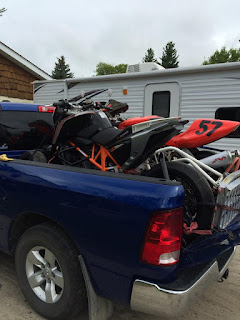 In short order we had Marmaduke and the Ducati loaded in the Hemi and we were on our way.  The forecast for Nebraska wasn't great, but for once we didn't experience any rain or torrential headwinds on the way down. 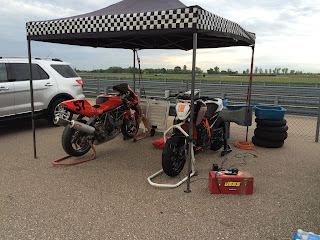 Saturday was rain-free, despite the dire warnings of the locals and the forecasts.  Overcast and about 23 degrees, which is perfect for a ginger like me. 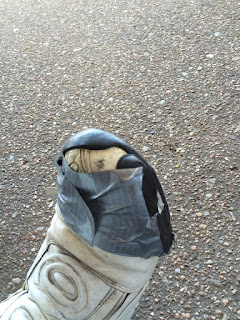 To use the kids' vernacular these days, Saturday was epic!  84 laps of a 2.2 mile circuit.  Rode until I was exhausted and tired, and the bike didn't skip a beat.  Very fun to ride, and passed a number of "bigger" bikes.  Got into the low 1:46s, which is a way off from the really fast dudes, but approaching my quickest times when I was on more powerful bikes.  In the longer corners, I was leaning over so far for so long I couldn't tuck my boots in any more, and I was grinding my toes past the sliders. 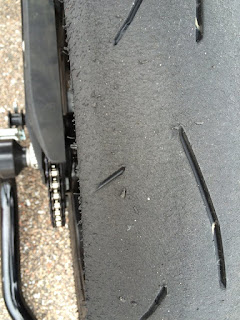 The Dunlop tires worked quite well.  They are the "Unbeaten" tires, in a 110/150 fitment -- slightly narrower than standard, but gripped fine for my purposes.  A few moments when there was movement, but no real slides or anything. 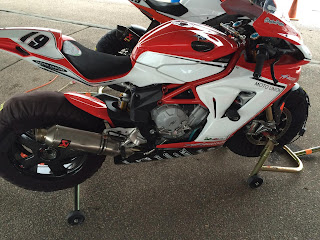 Sunday it rained a bit in the morning, but that was a good thing... still tired!  Under the metal canopy I oogled some of the bikes that were there.  When you are tired with your Aprilia V4 (background), take your MV triple out for a spin...

In the end, did another 30 laps on Sunday, but at least went a second quicker -- 1:45:3 -- quicker than I went on the zx7r when I was there last, and less than a second off of the ex650 I spent a lot of time and money on.  I am confident that I can go faster.  I was starting to get to the limits of the rear shock, but the forks held up fine.  In all, one of the best trackday trips, if not the best, I've done.  A great facility, a good organization, and a great trip.  Even a 70km tailwind on the way home saved some gas money.  Hooray!

Posted by The Kids Cafe at 2:54 PM No comments: 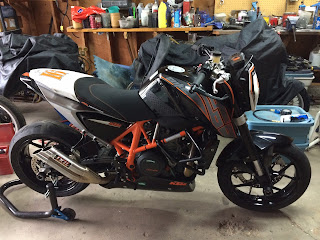 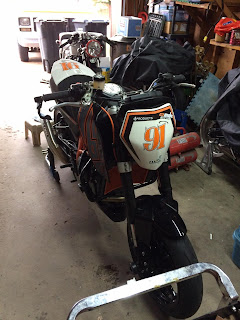 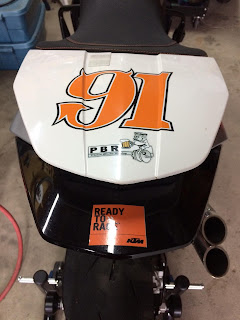 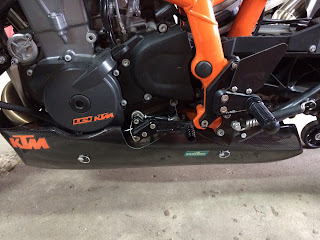 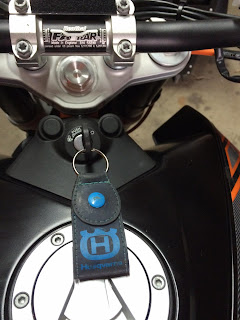 Posted by The Kids Cafe at 8:39 AM No comments: 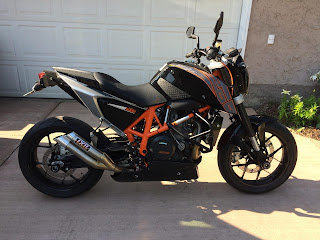 Posted by The Kids Cafe at 8:04 AM No comments: 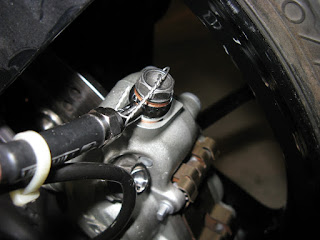 Cold and crappy day meant I played in the garage, doing some wiring on the Duke.  Front brake banjo. 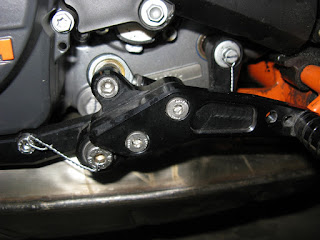 Rearsets -- some of these bolts loosened from the vibes at the track. 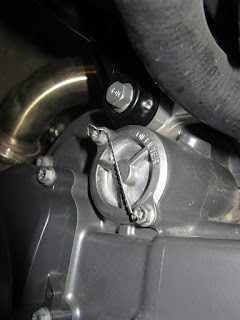 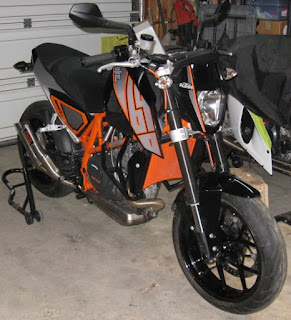 A wipe down with Plexus, and installed the front rad guard.
Posted by The Kids Cafe at 11:47 AM No comments:

Will Cal Crutchlow podium on the Duc in 2014.